As of Monday, Shannon and his crew put the 12th iteration of the American Triple T in the books. Many words come to mind reliving the weekend:  the first of which being tired, followed closely by awesome, amazing, awe-inspiring, and more.  Nearly 500 participants traveled more than 140 miles on calories, adrenaline, and determination over the three-day weekend. We could spend the rest of this little blogspot talking about the coolness of the event, the unique format, and all of those traditionally triathlon the kinds of things.  We won’t. What amazed me at Triple T were the incredible stories of compassion, humanity, friendship, patriotism, and determination. We’ll focus on those for a while.   I’ll also warn you:  there are probably several dozen fantastic stories of fantastic people who completed or tried to complete the American Triple T.  While I won’t pretend that I talked to everyone, or that I was able to get everybody’s story; I was lucky enough to have some great conversations and to learn about some of these fantastic people.

Glancing  through the pictures of all the excitement at the American Triple T, there will be several things that stand out to you. You’ll see Carolyn Stellatella (Un-officially declared the “Hottest Chick from NJ” at TTT) in her trademark and self-described “3T22”.  That is a “Triple-T TuTu“, she had a different one for every race, culminating in a sparkly, shiny, red, white, and blue number for the completion of the Little Smokies ½ Iron.  She was fun to see coming down the finish chute, and she always wore a smile.  She may have even softened my hard shell toward Jersey-ites just a little, too; as she was just awesome to be around.  Thanks Carolyn!

Another wonderful lady that will stand out in the pictures is racer number 412, Elizabeth Bart of Wisconsin.  You’ll know her not by her bib number or body marking, but by the United States Army hat (AKA – “cover”) that she wore on every run segment.  She wore that hat as a sign of respect and admiration for someone near and dear to her who is deployed in AFG in service to our country.  Lieut. Col. Larry Peterson gave her his cover, and she proudly wore it for all to see, telling everyone that she thinks of the Lt. Col. while she trains, and that he and the rest of our US Armed Forces are her motivation to continue to train.  “If they can train and deploy and serve that hard for us” she explained, “and I can train in race that hard for them.”  I think the Lieut. Col. will be happy to know that she represented him in his cover very well; but Elizabeth thinks it’s more important that he knows the reaction she got while wearing his cover.  “So many people told me thank you, and told me to tell him ‘thank you for your service’, it’s really great to know that so many people care.”  Well Elizabeth let me add one more here, and let me say from all of us at HFP Racing: thank you for honoring our servicemen and women with one small deed that means and matters so much.  As you may have noticed from our Team HFP Racing gear, as well as the more than two dozen American flags flying at the venue; it matters to us too.  Several of our staff and former staff are either currently serving active-duty, or reserve duty rolls.  Yes, it matters to us.  Please tell the Lieut. Col. when his deployment ends and he’s back home training safely on US soil, we would love him to be our guest at the HFP Racing event of his choice.  (Wearing his OWN cover this time!).

You may also notice pictures of people signing a T-shirt.  That T-shirt has some significance as well; it was intended to be the finishers T-shirt for racer who signed up long ago, but who has been deployed since.  His buddy and teammate was able to travel to Triple T and race with us, but he took his Finishers T-shirt and passed it around the weekend asking racers to sign it for the 1st Sergeant and send it to him, just to let him know he was missed here as well.  If you didn’t get to sign that T-shirt but would still like to do so “virtually”, drop us a note at customerservice@HFPracing.com and we’ll pass along your well wishes to the 1st Sgt.

This was also being planned as a “welcome home” race for my adopted little brother 1st Sergeant Dennis Gossard, who has yet to be able to participate in an HFP Racing event due to his multiple deployments with the US Army.  He and his Company do “shadow runs” of the various marathon schedule in the US, but they couldn’t shadow the TTT without anywhere to swim!  I can’t say that it didn’t sting just a little getting the T-shirt signed for another 1st Sgt knowing he wanted to be with us here.  Just keep your butt moving and your head down, and we’ll see you in a few “wake ups and a plane ride”.

So for all of our racers who are Vets, Active, or Reserve, and for all who love them – THANK YOU from all of us.

See you on race day! 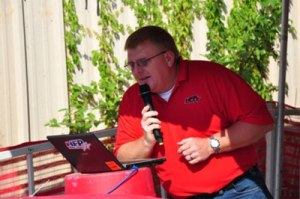