American Triple-T may be sold out, but TOUGHMAN Ohio has open spots!

Are the winter blues kicking in? Do you need some training motivation? Our Arizona Triathlon Training Camp is just what you need! Camp is March 1-8, 2020.

Did you miss out on the previous HFP Racing gear order? The store is back open and closes on February 1st! Don’t miss out on getting gear for your 2020 training & racing!

Detail on the training camp + gear order can be found here: https://mailchi.mp/hfpracing/arizona-tri-camp-gear-order 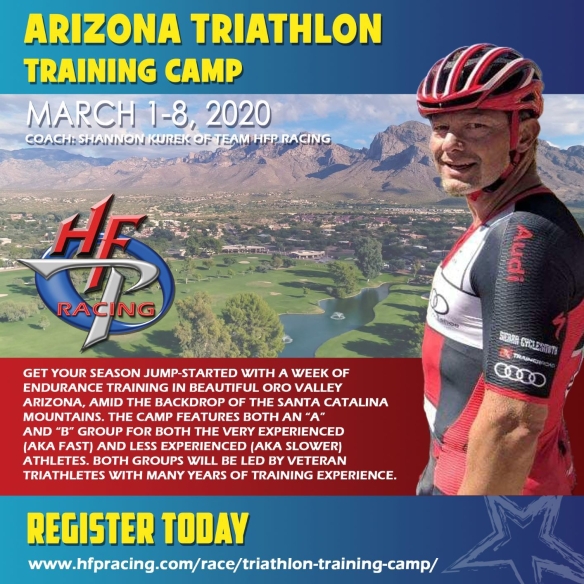 Cambridge, OH – The American Triple-T Fueled by Infinit Nutrition has officially SOLD OUT for 2020. Race officials announced today that this unique 3-day, 4-race event has reached the field limit of 400 participants in record time nearly 6 months before the May 29 – May 31 race weekend. The field is filled with triathletes from all across the United States and Canada. A total of 27 states and two countries are represented for this challenging event set to take place in Ohio’s largest state park. Highlighting the field is Olympian and professional triathlete Andy Potts.

“We’re so thrilled at the response to the 2020 American Triple-T. We knew when we moved to our new venue (Salt Fork State Park) in 2019 we had a major hit on our hands. With a few course changes already in the works, the 2020 event will be even more epic!” Shannon Kurek, Race Director – American Triple-T

What IS the American Triple-T? Well, it’s everything you’ve heard it to be, and more. The event is so much more than your typical “triathlon weekend” — it’s a triathlon achievement of epic proportions for all who partake. It is 3 consecutive days of racing, gelling together 4 races covering a total of more than 70 or 140 miles for the weekend. You will find yourself swimming in chilly Salt Fork Lake, riding the challenging hills of Guerney County, and finishing with a demanding run on the park roads climbing and descending those same hillsides.

“Infinit Nutrition is proud to be the official fueling sponsor and excited to see the continued growth of the American Triple-T. This is a true grass roots event produced at the highest level. You’ll love the atmosphere HFP Racing has created at this event and the enormous challenge the 4 triathlons over 3 days provides.” Michael Folan, Infinit Nutrition Founder & CEO

For those not quite up for the challenge of 4 triathlons over 3 days there is a stand alone event that provides an opportunity to take on the final day of the American Triple-T. Toughman Ohio features a 1.2 mile swim – 56 mile bike – 13.1 mile run half iron triathlon. Only 50 spots are currently. [GET REGISTERED NOW]

If you have been waiting to register for 2020 races, now is the time to register + save 25% on your racing season.

We are about halfway through the BEST sale of the year!

This link has complete details on the sale!

Don’t delay! This sale ONLY happens once a year and ends on January 15th at 11:59pm.

The sale you have been waiting for is now on!

This is our way to show appreciation to all of you who continue to support us!

Now is the PERFECT time to starting planning your racing season!

To take advantage of this deal, use the code: HFP-SUPER-SALE-2020. The code is case sensitive, so you will have to use ALL CAPS. Discounts are not retroactive for events already registered for and cannot be combined with any other discounts. (Excludes New Albany Kids Triathlon)

For complete details, check out our newsletter